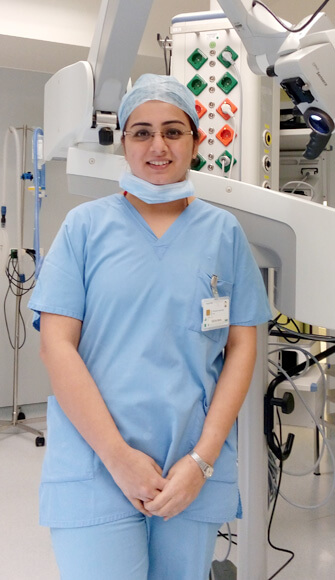 
Dr. Binhi H. Desai is a renowned ENT surgeon practising in the western suburb of Mumbai. She took up MBBS from Dr VNP medical college, Nashik through merit seat under government quota in 2005. She got distinction in physiology in first year MBBS. She passed all MBBS years with first class marks (2005-2011).

She did her internship training in Nair hospital, Mumbai central and Dr VNP medical college Nashik.(2010-2011)

She got post graduation in first attempt under government quota in goverment medical college, Nagpur. it is a premier institute of India. (2011-2014)

After post-graduation, She served in peripheral BMC hospital at Goregaon - Siddharth hospital, a periphery of Nair hospital for 1 year. She worked as senior registrar independently seeing 50 patients in the out-patient department daily and operating on around 300 surgeries in 1 year. owing to her keen interest, sincerity and dedication, She operated on routine ent surgeries and also on complicated surgeries such as – thyroidectomy, parotidectomy, cancer of head and neck independently. (2014-15)

She was selected for national fellowship in Laryngology and co2 training under one of the best voice surgeons in India- Dr Nupur Nerurkar at Bombay hospital. (2015-16)

She was fortunate to be accepted for an international observor fellowship in laryngology under world s best voice surgeon- Prof. Marc Remacle at university hospital, Luxembourg. (2016)

She was also priviledged to be accepted for international observor fellowship in airway under one of the best airways surgeons in the world - Prof Kishore sandu at university hospital, Lausanne, Switzerland. (2017) She has special interest in voice and swallowing.

She along with her husband have started Desai Orthopedic and ENT clinic in 2014, with the aim of providing honest care to all.

She has been a part of multiple camps in above hospitals. She also travels to south Gujarat – Vapi and Valsad to create awareness and see patients with voice and swallowing difficulty.

Working as a consulting otorhinolarynolaryngologist and head & neck surgeon with special interest in laryngology since last 3 years. Have been very active in managing cases of voice, and swallowing problems.

Have worked under Professor Marc Remacle, one of the best laryngologist in the world, at Centre Hospital de Luxembourg for 1 month for laryngology, airways and swallowing.

Have worked under Professor Kishore Sandu, one of the best airway surgeon in the world, at Centre Hospital de Vaud, Lausanne for 1 month for laryngology, airways and swallowing.

Have been very active in creating awareness regarding dysphonia, laryngeal cancers, basic ENT problems in general population and pediatric population.

Have been visiting charitable hospital hospitals in Vapi since 2 years regularly every week (Wednesday).

Have conducted camps in school for special kids in areas of Valsad, Vapi to assess them in hearing problems, swallowing problems and voice problems.

Have been trained in managing emergency situations of nose like foreign body of nose, epistaxis, fracture nasal bones.

Have been trained in doing laser, cryosurgery surgeries.

Have been trained in doing surgeries of oral cavity, neck like wide local excision, radical and modified racial neck dissection, sistrunk operation for thyroglossal cyst, surgeries for branchial cyst and fistula. Have been in doing flap reconstruction like deltopectoral flap, free flaps.

Have been trained in doing surgeries of larynx like microlaryngoscopic surgeries for benign and early malignant cancer of larynx, partial and total laryngectomy.

Have been trained in doing surgeries of thyroid gland like hemithyroidectomy and total thyroidectomy.

Have been trained in managing emergency situations like stridor, foreign body larynx and bronchus.

Have worked as Laryngology fellow to Professor Marc Remacle, one of the best Laryngologist in the world with an experience of 35 years. He is also a very keen academician. Have been fortunate to seen a variety of cases of vocal cord cyst, sulcus, nodules, laryngeal cancers, laryngeal papilloma, vocal cord paralysis.Have been fortunate to see rare surgeries like medialisation thyroplasty, feminization surgeries, endoscopic partial laryngectomy for laryngeal cancers. His work in feminizing thyroplasty and endoscopic partial laryngectomy for laryngeal cancer is world renowned.

Have worked as Fellow to Prof. Kishore Sandu, one of the best airway surgeons in the world with an experience of 20 years. He is the head of Airway department at Centre hospital de Vaud in Lausanne, Switzerland. The hospital gets referral of all complex airways cases mainly paediatric cases. Have been fortunate to see cases of laryngeal clefts, subglottic stenosis, laryngomalacia, glottic stenosis, congenital vocal fold paralysis and posterior glottic stenosis. Was fortunate to see rare surgeries like partial cricotracheal resection done at very few places in the whole world.

Have worked as Laryngology fellow to Dr. Nupur Nerurkar, one of the leading phonosurgeons in India with an experience of more than 20 years. She is very active in holding camps and national conferences in voice to create awareness regarding voice problems. Have seen innumerable and rare benign and malignant cases of vocal folds like contact granuloma, spasmodic dysphonia, muscle tension dysphonia, laryngeal lipoma, laryngitis sicca, laryngeal keratosis. Also seen cases of difficulties in swallowing and respiration like laryngeal stenosis, laryngeal webs, tracheal stenosis, laryngeal papillomatosis, tracheomalacia.

Conferences & Courses Attended
Publications, Research and Presentations
Publication Case Series 1. Mishaps of Larynx in pregnancy – a case series. in International Journal of Phonosurgery and Laryngology 2016. I am first co-author. 2. lipoma in larynx- case series. in International Journal of Phonosurgery and Laryngology 2017. I am second co-author. Case Report Killian Jamieson Diverticulum – A Rarer Cervical Diverticulum“ in International Journal of Phonosurgery and Laryngology 2013. I am the first co author. Research Title – “Clinicopathological Study Of Sinonasal Malignancy” Guide – Dr. ApurvaPawde, Professor and Head Of Department, Government Medical College & Hospital, Nagpur. This study was carried out in ENT OPD of tertiary care hospital from October 2011 to September 2013. This was a nonrandomized prospective study of total 41 patients. All patients of sinonasal malignancy were included in the study. They were assessed, evaluated and managed according to case proforma. Presentations Social Initiatives Have conducted many camps in Vapi to create awareness for general ent problems and voice, airway and swallowing problems. Have been a part of many camps in schools and hospitals in Mumbai. Have conducted camps in schools for special kids in Valsad and Vapi. Camps was conducted by a team of Pediatric Orthopedician, Otorhinolaryngologist, Pediatrician, Pediatic Physiotherapist and Speech Language Pathologists. Camp was attended by 100 children. Schools were “Vatsalya”, Pardi, “Jalaram Manovikas Kendra”, Valsad. Was also invited to give a talk “ENT Problems in Cerebral Palsy Kids” on Cerebral Palsy Day 4th October 2015 in Valsad.